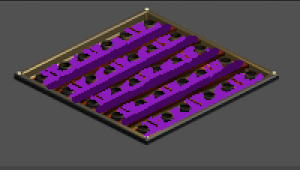 Targets:
land and air (same)
Health:
moderate health--> higher health but lower than that of a shadowbane.
speed: 3-->4
Range:
*remains the same*
Damage:
sustain-->Area-main weapon is replaced with a grenade launcher*
Size:
100-->200-3 can be in a max bunker (note watchtowers also increase their grenade range)
as the unit is more elite there must be fewer of them.

*Grenade launcher-fires 6 shots before reloading that each apply a separate elemental effect
1-cryo-slows down units for the next 5 shots
2-smoke-applies smoke to the target being fired at (when targeting air no smoke is applied and is treated as merely a grenade)
3-carrosion-next 3 shots deal more damage
4-fire-deals a large amount of damage and applies the napalm effect
5-scramble-disables the weapons on vehicles
6-plague- applies the plague effect to all units not immune to it.

(should a unit leave during this cycle the cycle will restart)

immune to all status effects except marked and carrosion.

Named after the forum moderator: https://www.kixeye.com/profile/520e0312fb7b7ee05d000145
Darkshadows is the leader of squad 2069 and the most dangerous shadow operator second only to sarkis himself.

at each 25% health intervole [25%,50% and 75%] he stops firing,and enters advanced stealth for 5 seconds, and spawns 3 shadow soldiers alongside a squad 2069 member