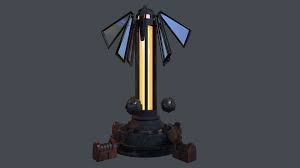 It is the ability of a Unit to cloak other near by units in under its range and aura using special technology in order to conceal their position and movements from the enemy.
new infantry / structure idea
this status / ability can be disabled with tracker - new survivor unit coming in next event night mare deadfall
Any ground unit in Stealth mode standing close to this effect infantry / structure will become invisible.
around 50 range area around this structure have stealth aura
other unit coming close to 100 range will detect invisible units
Only the closest unit will become visible while all other units in the squad will remain in stealth.

Land Mine Proximity will reveal the invisible unit
Stealth is disabled and the unit is uncloaked while in gauging in an attack or defense and is actively firing a weapon.
Stealth remains active and in effect while the unit is moving or targeting an enemy unit or structure.
Once noticed, a red (

) icon will be placed over the Units or Building exposing the Stealth units.

) while uncloaked may not may not re-cloak unit the Status Effects have worn off.

Withdrawing affected units from an attack will terminate any Status Effects the enemy has applied.

Stealth Technology was developed and introduced by the Corpus Rouge Faction.