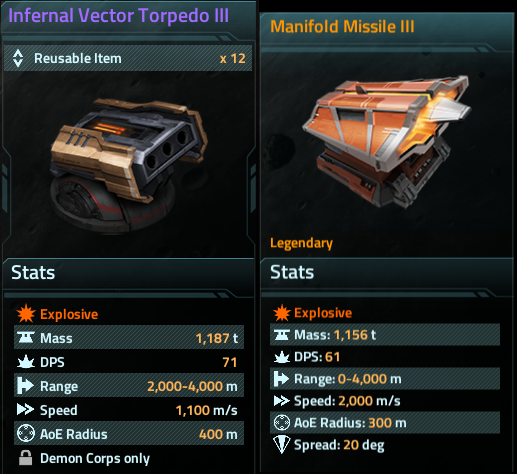 Mass: Nearly identical, with Manifold having a slight edge on Vector
DPS: Manifold does 2-3x more than its listed DPS, so it's the clear winner hear.
Range: Manifold is also the clear winner with no minimum range.
Speed: Manifold, once again is the clear winner.
AoE: Vector wins out here, but this is the only place where it wins.
Spread: The Vector has none, but 20 degrees is fairly insignificant.
Fit time: It takes 2 days to fit a Vector and only a little over 5 hours for a Manifold.
Furthermore, the Infernal Vector can only be fit on Demon Corp ships.


Conclusion: The Infernal Vector is a useless weapon and I wish I hadn't gotten a single one.  Thus far, the only good weapon we've got out of the Aliens is the Repeating Polaron and maybe the Infernal Gatling (but Gatling's never been that good). @CM_Scarlett
Conflict Resolution, new for fall 2016.  Make friends with your neighbor!  Bake them space cookies and help water their space lawns when they're on vacation.  Recycle each other's spent asteroids.  If you have a tiff, just talk it out and everything will be great.  Pre-order now and receive one free hand-knit doily from Burr's sweet old grandmother.
VM.png 248.3K
2
Sign In or Register to comment.