Ok, here's what you've all been waiting for; someone to create a ship calc/planner after TopGear left his project.

After TopGear stopped working on the Ship Calc, I decided to continue my old project, from way back when the game was still in Flash. And by 'continue' I actually meant completely start over from scratch, since it originally was meant to be an app for PC. But tbh, had I known how much data was in the game and how much coding this would take, four months ago, I would probably never had started. ><

Keep in mind, as I don't have the same connection to Kix as TopGear had, despite my best efforts over the years, it will take time for new items to appear on the site, after they've been released. Various new mechanics may also deviate from what you get in-game, as I either have to figure these out myself, or wait for them to be added to the wiki. There’s a lot of work involved in that and getting it right, so please be patient.

Most mobile devices should be supported, but it's hard to cover every variant out there, so you're likely bound to run into problems at some point. Internet Explorer and Edge on the other hand, I've had to disable due to various problems. Microsoft seems to have their own thing going and doesn't seem to care about supporting features other browsers do. Any other browser should work.

For now, it's in English only and with minimum descriptions on stats, until I get the time to translate everything. However most icons should be self-explanatory. Some may differ slightly from what you see in-game, as those often make no sense.

And before you ask, no, I will not call it Ship Calc, as that was TopGear's thing and it may confuse players, which one is meant.

Leave a comment with any issues you may have and I'll see if I can fix'em when I have the time. 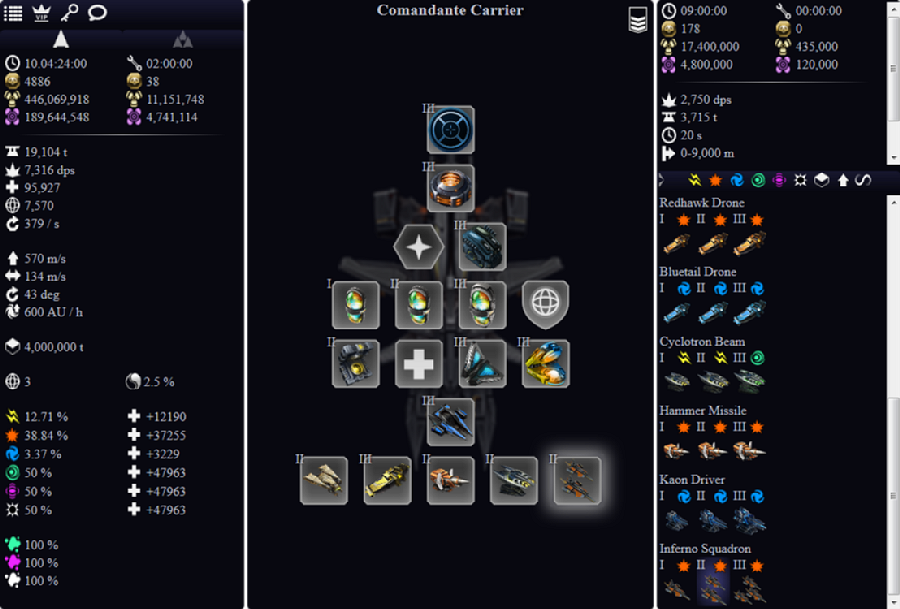 * If a targeted slot has an item in it, the items will swap places instead. First remove what's all ready there, if you want to do a copy.

All settings are persistent, but can be changed at any given time.

1.0.530
- Added Tachyon Thruster.
- Added shield modifiers from specials.
- Added ablative recovery modifiers from specials.
- Added ablative stats to both item and ship overviews.
- Added additional mark upgrade data to overview.
- Updated Harvester.
- A few items have been restricted from being equipped on tier 8 hulls and up, as per this update.
- Adjusted and fixed various item data.
- Fixed a bug, which allowed thrusters to be equip on Dreadnoughts.
- A couple minor bug fixes.