Ok, let's try this again and this time in a browser. The standalone app wasn't quite as successful as I had hoped. Either people just didn't care, or it didn't cover enough platforms. Only a handful of players ever tried it. After the last major base change a few months ago, I worked on it for quite a while till Kix made changes again, and I decided to try another approach. People complain about weak bases and while that's partly true, it's mainly due to poor base designs. People seemed eager enough the first time around and since some have asked for one, lets try again and see if they will use it this time.

The browser version is a bit simpler. You won't get to choose fancy colors and many other things, as you did with the app, and for now it only supports Bridge 8. I may change that depending on demand and if people actually use it. The coding needed to do that is quite extensive, so to spend months and even years on something that only two people will ever use, is not time well spent.

The layout is quite similar to the app, but I've optimized it quite a bit and given you several ways of keeping track of everything.

The design code may seem a bit long, especially if you fill every slot on every structure, but if you consider that it contains information about 102 structures, their locations and the content of 395 slots, a few hundred characters may not seem that long after all. Even so, I may implement the code system I used in the app. That should shorten it quite a bit.

Base level and experience are not fully implemented yet. Still missing some data on various base levels. I need more (preferably all) before I can implement those. Also, I still do not have exp values on all items, as that would require 10+ accounts and literally years to gather.

For now there's no Dps Meter. To get that to work in the standalone app was quite simple, but it's a bit tricky to do with a browser. The method used to calculate an irregular dynamic shape, could slow down everything quite significantly. I'll add it when I come up with a reasonable way to implement it, that won't require calculating one million polygons. I do have some ideas, though, so may work on that next.

Expect to run into some problems if you use Internet Explorer, as IE doesn't fully support HTML5. Microsoft is bent on pushing people towards buying newer versions of Windows, so they've left out some crucial features. If IE is your only option, then you should give FlashCanvas (flashcanvas.net) a try.

Keep in mind when you design a base; Tier 6 - 7 hulls have 40-50% resist against Xeno, Siege Casing grants 40-50% resist against projectile and most players use additional resist mods on their hulls. Add to that resists from PRAL armor, so even though they hit more often than most weapons, weapons like Storm Driver, Eclipse Driver and Xeno Eclipse Driver aren't as effective as you may think.

Haven't done any web coding in years, so there are bound to be some quirks here and there. Give it a whirl and let me know if you find any.

Yeah, I know, "The End Is Nigh", and "We're all doomed" and all that, but I'm gonna put it out there anyway for you to mess around with, should you feel the need. 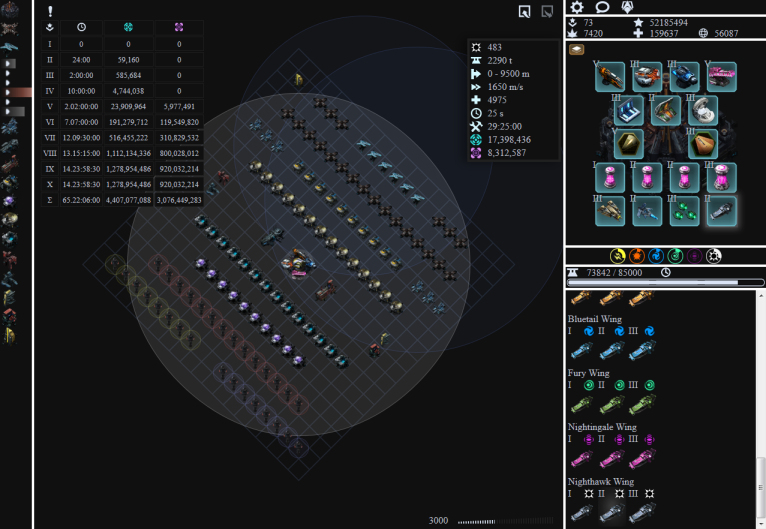 Whenever a change is made, the design code in the address bar is updated. Should you need the same design at a later date, either save the link or copy the full address and store it somewhere.

Click the banner to start a new design. Should you click it by mistake, just go back one page and it should take you to the design you were working on.

1.0.492
- Added new XP values for Nova Missile Turret, Atomic Driver Turret, NET Burst Torpedo Turret, Resonant Plates, Xeno Field, Plasma Field and Blight Field.
- Fixed a bug where if you fitted a level 4 Xeno/Plasma/Blight weapon on a combat module, field view didn't reflect it was a level 4.
- Fixed a bug with shield energy bonus from resonant plates, where plates from all structures, could increase shield energy on each individual shield on other structures.

1.0.343
- Added resists to the UI.
- Added some missing localization.
- Renamed Projectile to Kinetic for all items and all languages.
- Fixed a couple modules with incorrect data.

1.0.275
- Added Dps Meter.
- Added the last of the Xeno names in Chinese.
- Fixed a minor bug where items would only display their names in English, if the names were too short.
- Minor UI changes.