Avalanche has begun. Take down Zakon labs to earn the Ka-50 Black Shark Helicopter and the ZSU 23-4 anti aircraft tank - aka “Zeus”. Watch these units in action and then wage your assault with advancement on the new Event Leaderboard.
http://bit.ly/2gbZ8dg

Avalanche is a campaign style event where players will have a limited time to complete brand new campaign missions to earn "War Credits"; War Credits can be used to redeem prizes from the event store.Once the event is active players will see a pill in the upper right hand corner of the screen.  Clicking on this will bring up the event modal: 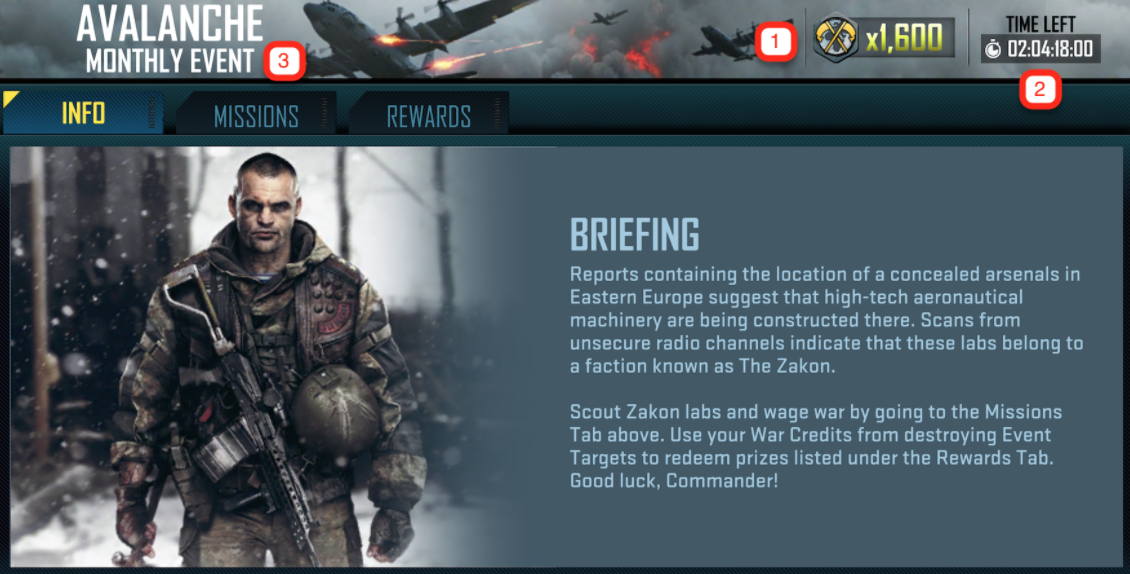 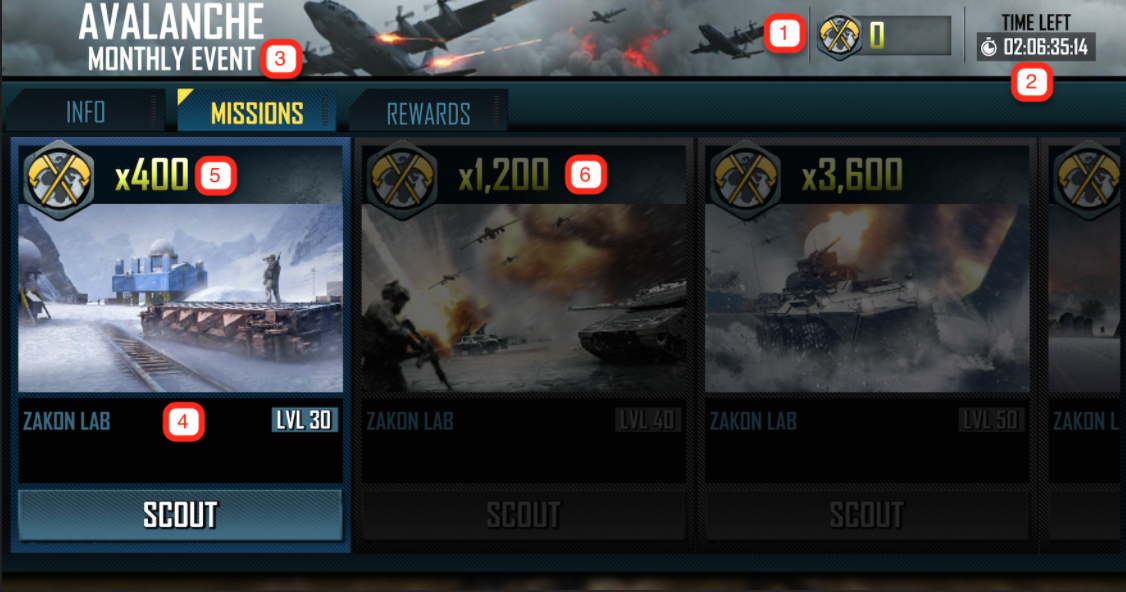 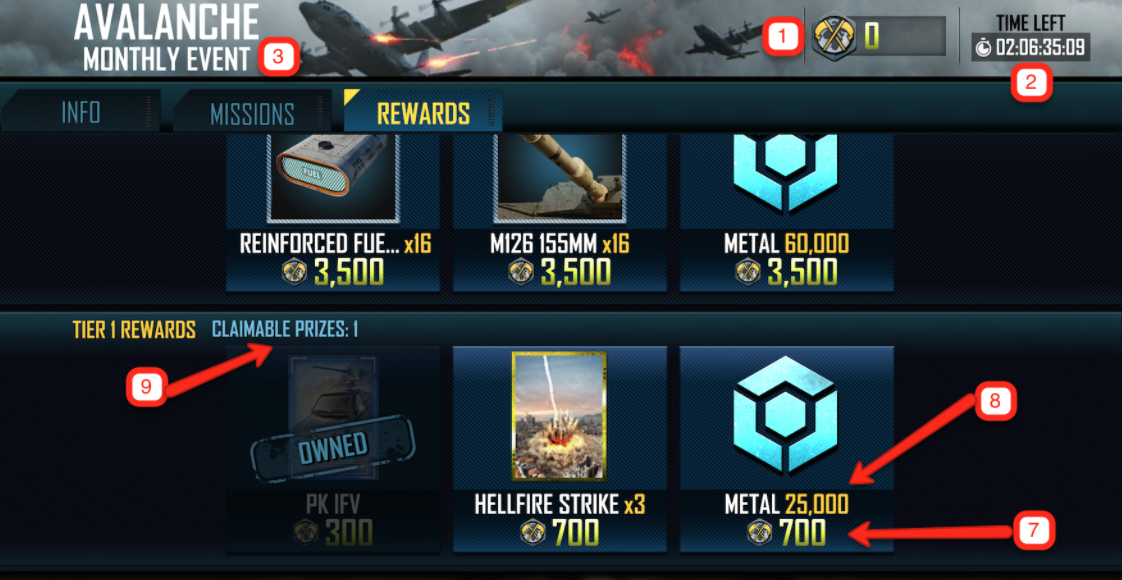 From the event modal, players can pick which mission they complete. There are 9 missions total, only the first on unlocked to start. Completing the first mission will unlock the second one, completing the second unlocks the third, and so on.

Much like in Strongholds, damage will persist in these targets for up to 10 minutes, at which point if the target has not been defeated it will revert to full health.

Once a player is ready to tackle one of the missions, they will need to select it and click "scout" 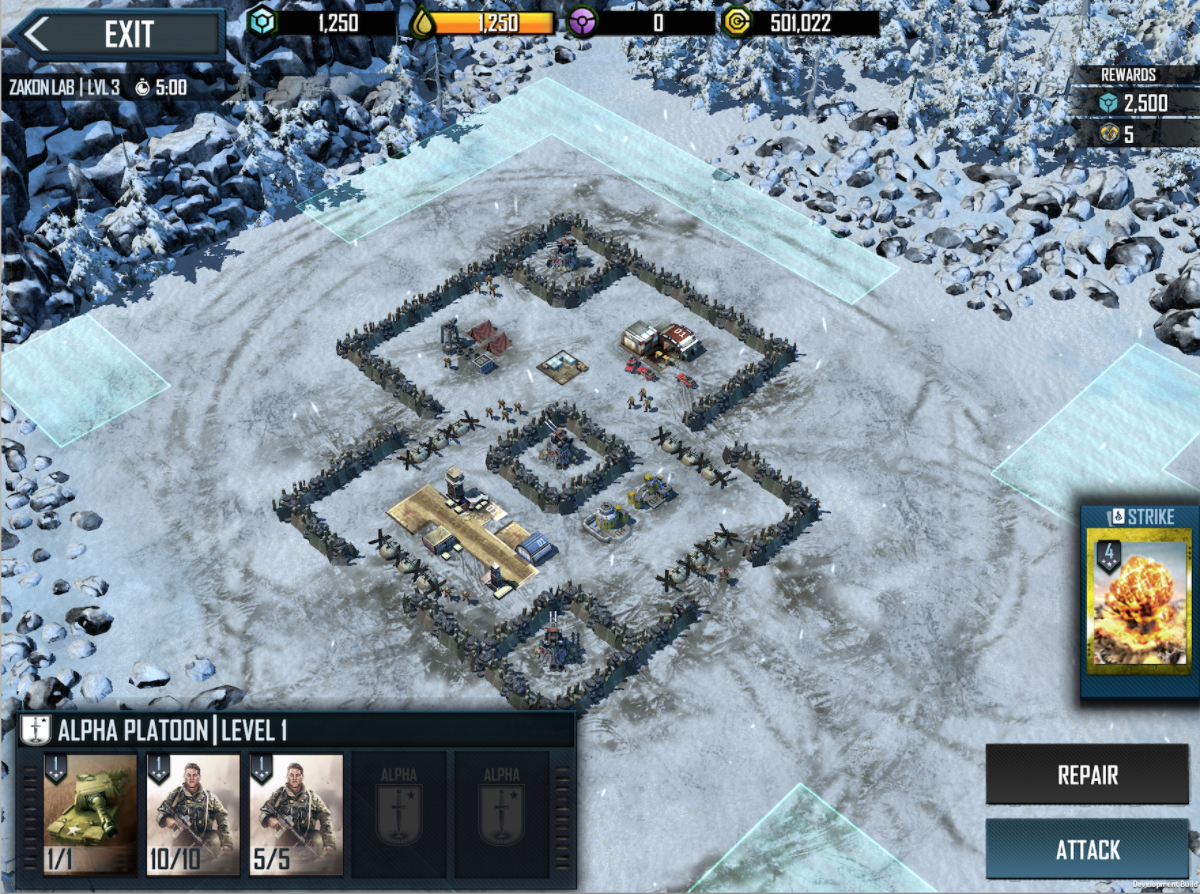 After successfully completing a mission players are shows a toast with the War Credits they have received. 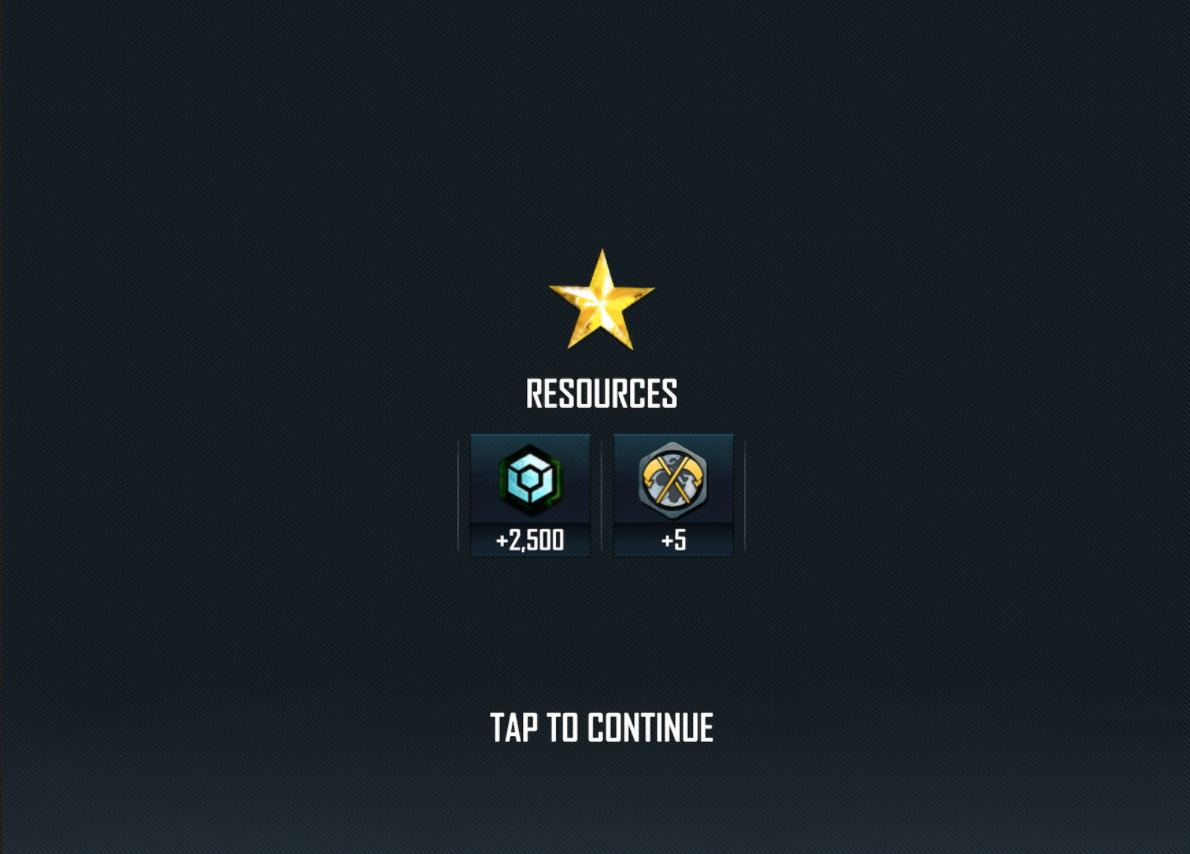 Players will also be shown a reward summary screen where they can see everything they earned from that from that run of attacks and given the option to "Blitz". 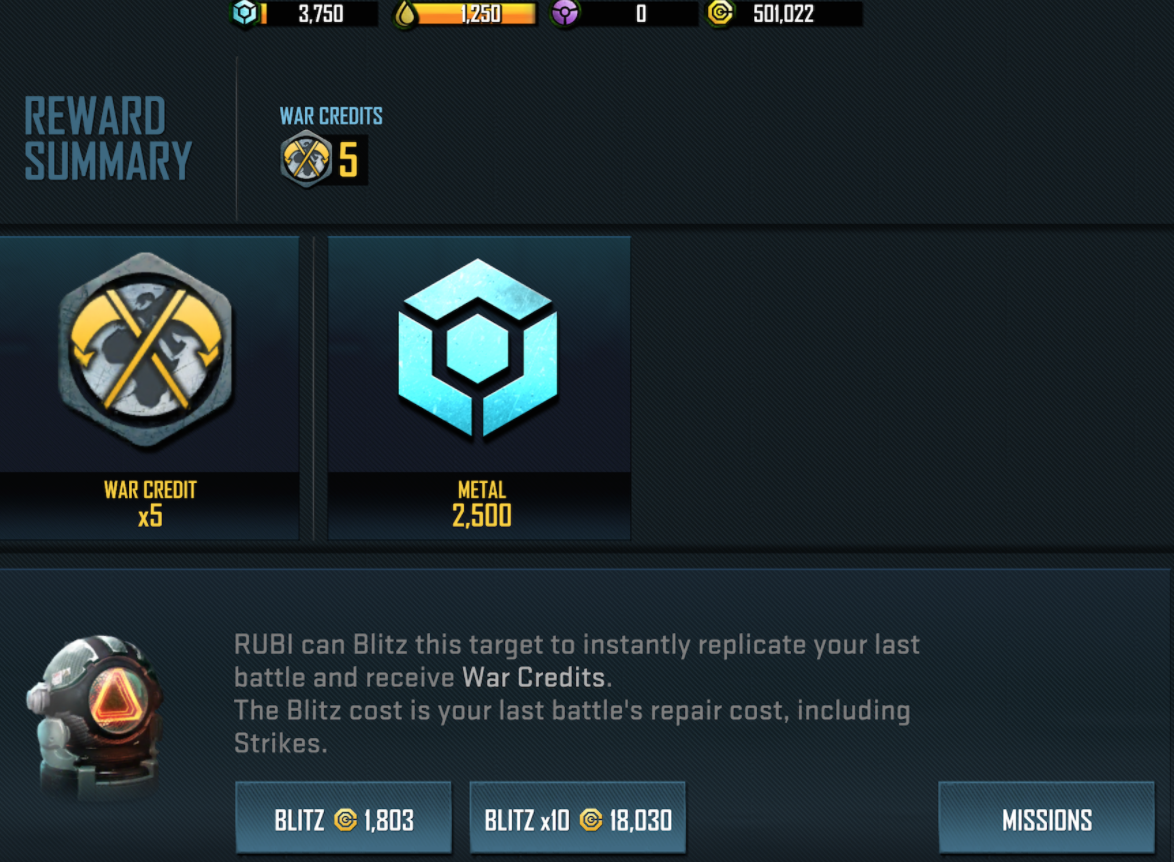 Going back to the main mission modal from here will allow players to hit the next target (if they defeated the one they attacked). 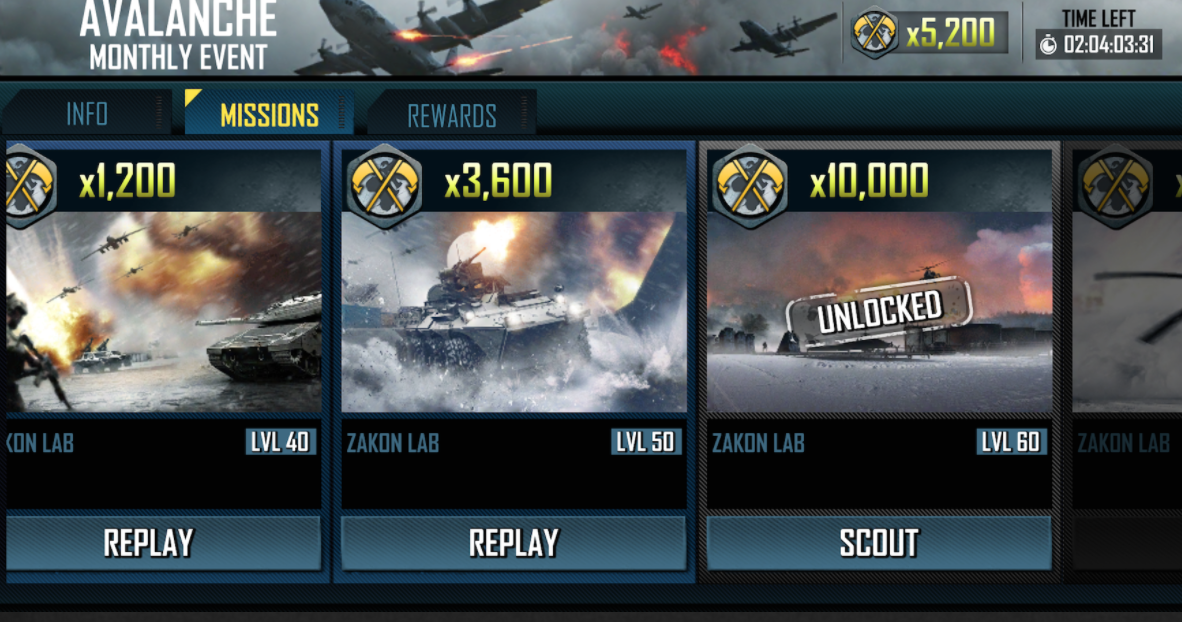 Players are able to repeat this process to unlock further prizes packs for reaching new milestones.

Much like the repair blitz found in Battle Pirates, this will allow you to simulate the battle you just had 1 or 10 times to earn the same amount of points you got from that one hit for a nominal amount of Gold, which is roughly the cost of repairing all your troops that were damaged, along with any strikes you used. 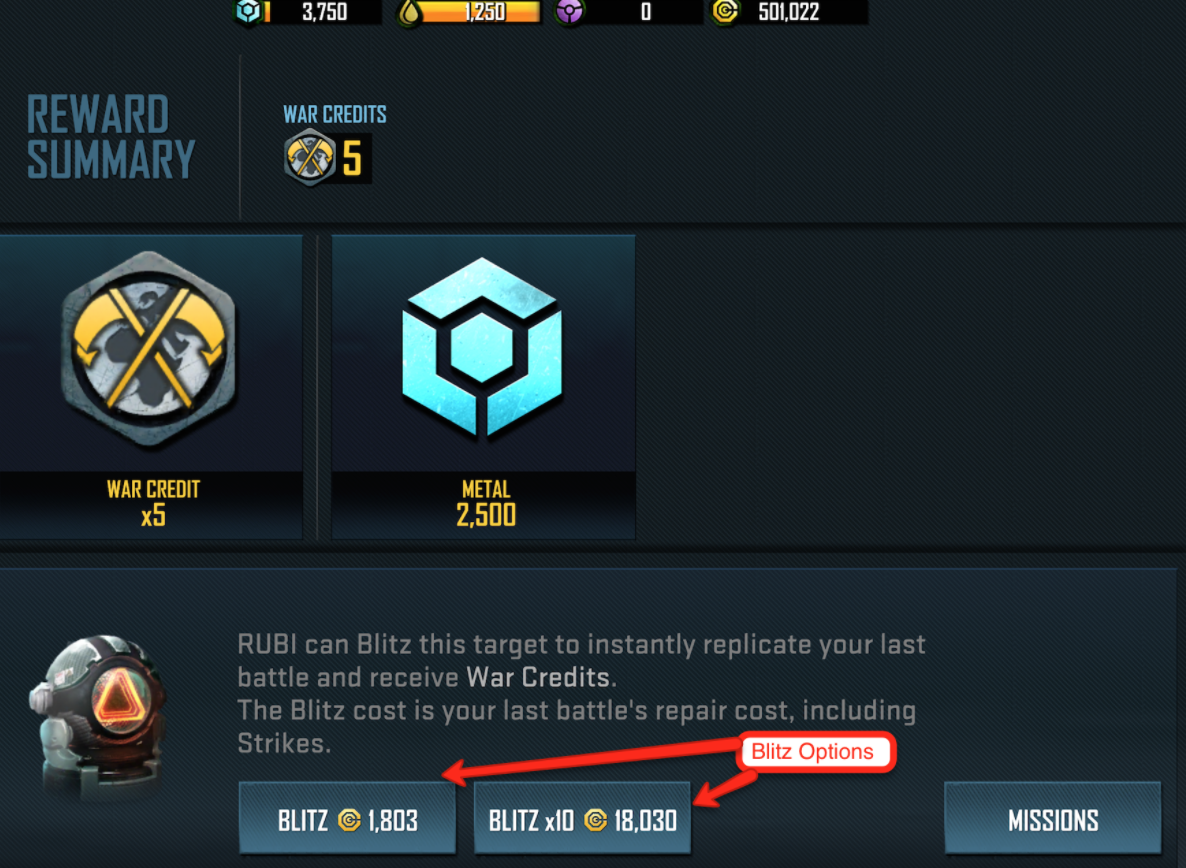 There are a few caveats to keep in mind when blitzing:

New to this event our leadaerboards to track who has earned the most War Credits overall.  At this point they are simply just for bragging rights, but for future events we plan on paying out prizes based on your final rank.

Players can spend their War Credits to redeem prizes from the Event Store. Prizes are broken up into tiers, with player limited on how many prizes can be claimed from a certain Tier. All tiers except T6 only allow one claim, so players will need to make choices as to what prizes they want and what prizes they will not claim in this event.

Tiers do not need to be claimed in order either. Players can start by saving up 800K right from the start and make their first claim from Tier 7 if they wish to do so.

There is also no grace period after the event ends where the store remains open for players to claim prizes. When the event ends the store closes as well so players will need to finish battles and claim all their prizes before then. 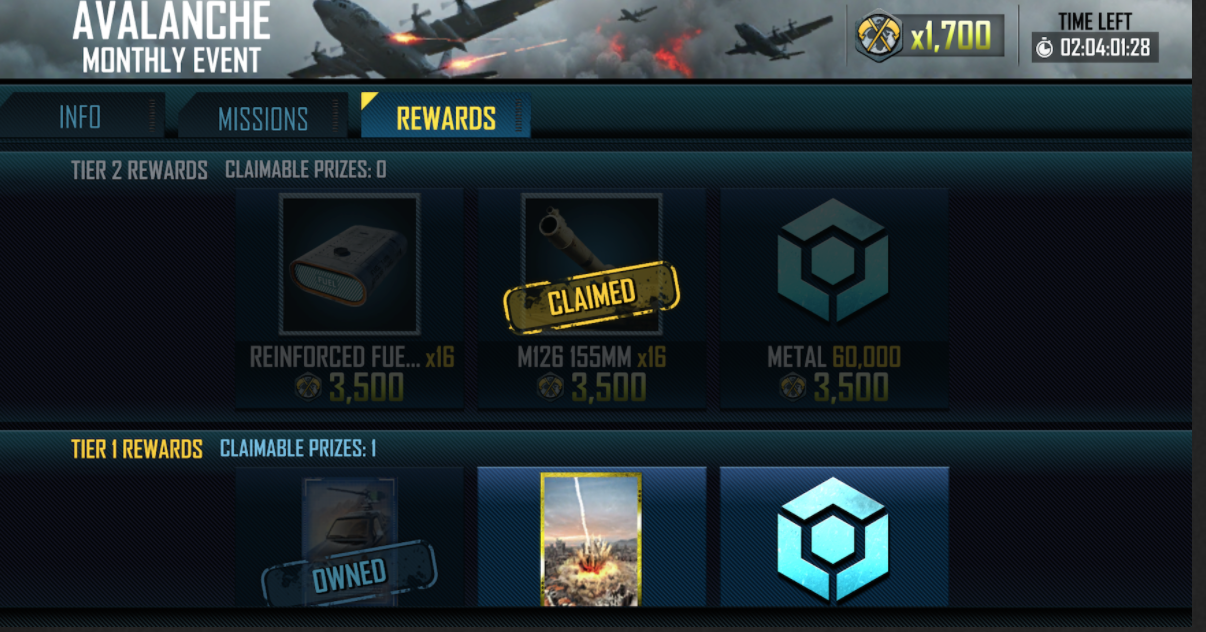 In the above screenshot you can also see one prize shows up as "Owned"; Blueprint prizes the player already owns also show up as "Owned" from the get go since they can only be claimed one time ever

I cannot discuss your account ban. Don't ask.
0
This discussion has been closed.