I want to thank you for taking the time and effort to voice your concerns, comments, and feedback regarding last month’s changes and our plans for further changes in the future. Obviously, the most prevalent changes that we’ve made were towards rebalancing weapons and armor and addressing a long-standing concern of yours: repair costs. Our Lead Designer, Captain Ouch, has written another missive as a follow up to last month’s State of the Game post. This message will focus mainly on these subjects and our response to some of your continued concerns. Thanks for taking the time to read up on what’s in store for the future of Battle Pirates.

As you know, the rebalancing efforts and the reduction to repairs is a huge initiative for us. We want to be as transparent as possible about the changes we make. Keep in mind, some things we do now set us up to do what we need to do in the future. With an initiative this big, it takes time and iteration but the end goal will be a significant improvement and healthy game. We already see a significant drop in the amount of gold spent on repair (refer to the graph below) and we are planning on doing even more!

As you know, we recently performed our first major rebalance in Battle Pirates, one that heavily impacted weapons and armor. We’ve received a lot of feedback, both positive and negative, and we thought we’d shed a little light on what is actually going on behind the scenes.

Following the 20% reduction across the board and the repair rebalance on several armor components, repair is in a better state than it was. We lowered armor repair time by between 20% and 40% and we are seeing a close correlation in reduced repairs overall. However, older NPC targets that were equipped with player weapons had their damage increased as a side effect of the rebalance, which increased damage received against those targets. It’s possible that this negatively impacted the changes to repair and we’ve been monitoring how much repairs now cost to make sure the reduction is actually having an impact. Here’s a breakdown of the differences in repair costs from before and after the rebalance: 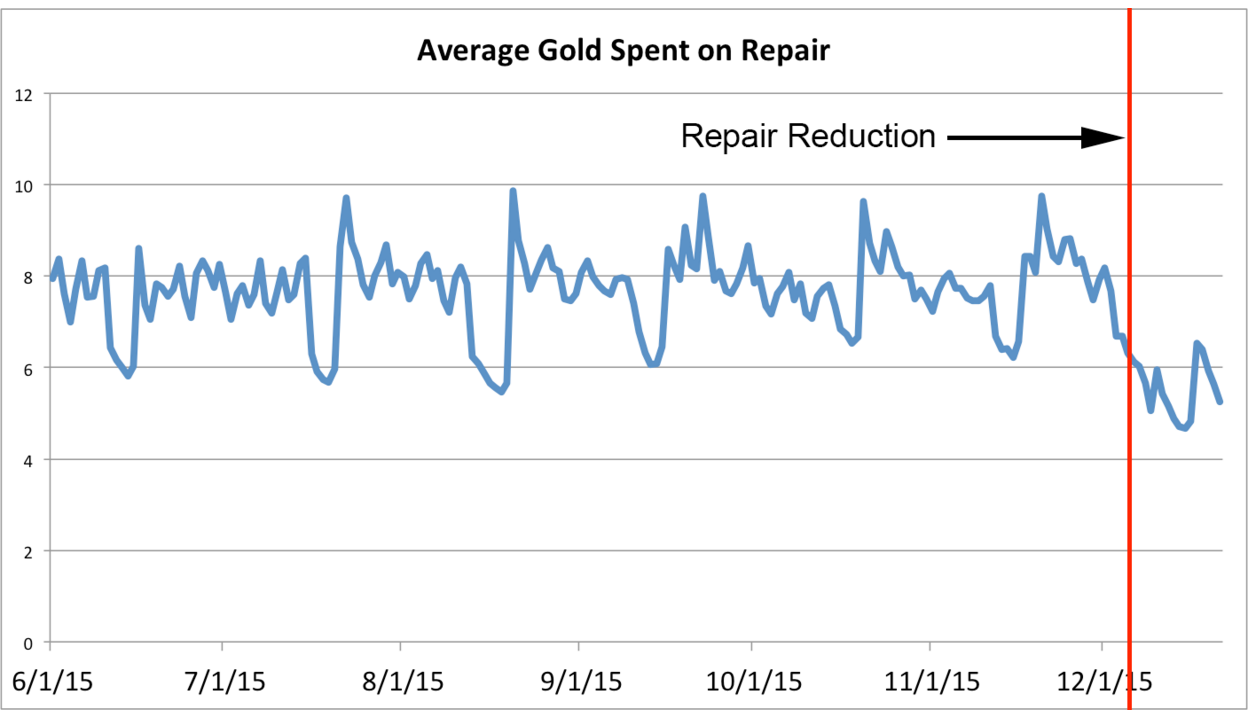 As the graph shows, the amount of player coining on repairs has gone significantly down since the change. We’re going to continue to closely monitor repair costs and focus on fixing any targets that had a difficulty increase based on the weapon rebalance. Your feedback further justifies the additional repair reductions planned for Q1 that will realign repairs to when we were in a healthier state. Again, this is an on-going initiative.

We’ve also been monitoring build costs and work has begun on rebalancing build times. Although we have more comprehensive changes planned, the R&D bonuses allow players to lower build times in small increments to reduce overall costs and is just the first, small step. In addition to the smaller changes already implemented, we plan to reduce overall build costs across the board, similarly to what was done with the weapon rebalance. With the weapon rebalance we changed many of the weapon build times and we plan to reduce build costs similarly for Hulls, Armors, and Specials. This rebalancing is being done primarily to address the constant issue of the size-to-cost ratio. Currently, as ships and fleets increase in size, the cost of their construction also increases. Additionally, old hulls that pale in comparison to new ones have longer build times. Our plans to adjust build times will address this.

We plan to have these build cost reductions done before the end of March with more incremental changes coming in January, February, and March.

Our goal with Sector Threat was to give players control over Uranium drops through coordination and social play. Player feedback on Dredge Fleets was that it was a frustrating ‘chore’ since you needed to schedule your life around Battle Pirates to progress. The new Sector Threat system has given an unprecedented amount of players access to Uranium outside of the FMs, but we acknowledge that the experience is currently uneven for some players. This is a new system and we are committed to fine tuning until we find the right configuration for all players through improving decay rates, target availability, and overall experience for lower density sectors. We appreciate your patience as we continue to improve the system.

We got a ton of great feedback and we are planning on improving the system based on your suggestions at the end of January/early February.

I hope this message helps to address your many comments and feedback regarding our plans for further rebalancing heading into 2016. More news to come!

-Happy Holidays from the BP Team!

Got some thoughts? Talk about it here.